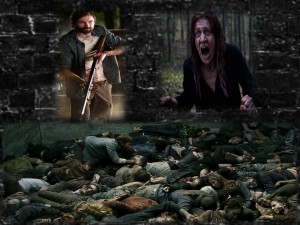 Open grave is a suspense movie which is about zombies and it is directed by Gonzalo Lopez-Gallego from Spain known for his thriller movie “Apollo 18”.This movie begins with a man coming out from a large pit full of dead bodies and he does not remember how he got there.

Somehow, this man manages to find his way back home and to his surprise finds five occupants who are also unaware of their identity. After some time this group finds a picture of them and a nearby calendar which indicates that something is going to happen in two days.

The man is John and others are Lukas, Sharon, Nathan and Michael and later they discover a video which reveals the medical experiments conducted by John. John explains that the vaccine is to prevent the infections from zombies and it also has a side effect of temporary memory loss. These five faces a lot of scary threats and attacks from the zombie and the story evolve about how they escape from the zombies without being infected. This movie if watched on halloween can bring you goosebumps out of fear.