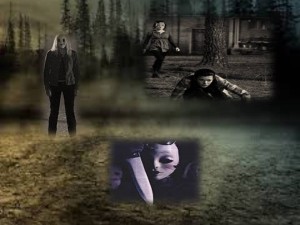 The Strangers is an American horror film written and directed by Bryan Bertino who was well known for his screenplay. This movie is about three strangers wearing weird mask to kill a couple after they return from a wedding reception. This movie is based on a true story and it was taken from true crime book named “Helter Skelter”.

James Hoyt proposes to his beloved Kristen McKay and brings her to desolate holiday cabin. Suddenly they hear a violent knock on the door in the middle of the night and they come to know that there are three masked strangers who follow mysterious ways to attack the couples. One of his friends, Mike comes to rescue them but he is murdered with an axe.

The story revolves around that isolated house and the threats given by those strangers are very terrifying. The mask is so strange that it creates a fear inside each and every viewer who watches it on Halloween.

Ghost rider is an American supernatural film directed by Mark Steven Johnson released in the year 2007. This story is about a contract or vow made by Johnny who was the motorcyclist with Mephistopheles, a terrifying demon, to grant his father Barton Blaze to regain his strength and recover from the terminal cancer by giving his soul to the devil. 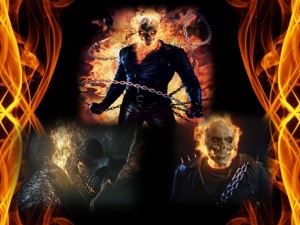 The devil deceives him and Barton dies in a motor cycle accident during an exhibition. Four years later, Johnny becomes the famous motorcyclist and meets his girlfriend Roxanne who is now a T.V reporter. Mephistopheles proposes Johnny to free him from the contract if he agrees to become the ghost rider and defeat the evil son Blackheart who wants to possess one thousand evil souls and transform hell on earth.

Johnny takes up the challenge and it is all about whether Johnny could beat the Blackheart and join with Roxanne, love of his life. The transformation of Johnny into ghost rider is a must watch scene in this movie. 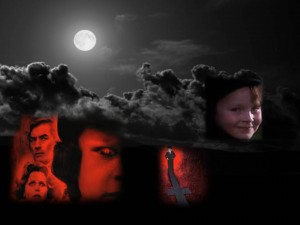 As exorcist is known to be one of the scary movies of all times, so do Omen. It is an American/British suspense horror film directed by Richard Donner who was the director of the famous Superman movie. There lived rich wealthy couples, Robert and Katherine, who desired to have a baby but in vain.

Katherine has a still born child and Robert, who was her husband and US ambassador to Great Britain, is approached by a priest at the hospital to take a healthy newborn whose mother has just expired in childbirth. Without informing his wife, he agrees and takes that baby from the Italian hospital.

After relocating to London, They find some unusual strange events happening in their house and the priest tells their parents that the boy is not of the human origin and he is totally incarnated by evil. His father checks this by cutting the evil boy’s hair at the back and to his surprise he found the number 666. Each and every sequence in this movie thrills the audience and it is a must watch movie on Halloween. 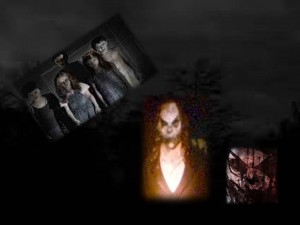 From the directors of Paranormal Activity and Insidious, Scott Derrickson directs another supernatural horror film named Sinister. This story is about how a true-crime writer named Ellison Oswalt escapes with his family from the haunted house. They moved to a place where a horrific crime took place earlier as Oswalt wants to find out more about the crime so that he can publish it in his new book to build his career strong.

In their new house, he finds some film footages which he thought that it would help him to write the book but it made things worse than he thought. His family members start to suffer one by one by the paranormal activities caused by the dark evil forces and the suspense of whether they will survive thrills the audience in fear and panic. Sinister is one of the recommended movies to be watched on Halloween and very soon its part two is going to hit the screens with more terror and horror. 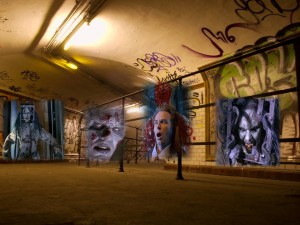 Thirteen ghosts is an American horror film directed by Steve black and it is the remake of the 1960 film 13 ghosts by William Caste. In this story, Ghost hunter Cyrus and his psychic assistant Dennis lead a mission to capture a spirit called the “Juggernaut”.

Several men are killed during this mission including the ghost hunter however they are able to catch the ghost. After the death of Cyrus, all his property including his glass house, his fortune and his haunting collection of ghosts are left to his nephew Arthur and his family. Arthur and his two children, Kathy and Bobby step into the house which serves as a prison to twelve ghosts and experience the evil paranormal activities.

They decide to come out of the glass house somehow and Dennis helps them in it. This story continues with lot of twist and turns as the dead hunter has faked his death to make his nephew to step into the glass house and the thrill keeps on increasing as the story is going to come to an end. This movie is a must watch movie for all those who love to watch scary movies on Halloween.

Insidious is a supernatural horror movie directed by James Wan which tell us about the creepy things that happens in a haunted house. The story is about a couple, Josh and Renai along with their three children, Dalton, Foster and baby Cali move to a big house. In that house, Dalton accidentally falls from the ladder while exploring the attic and goes into a coma. When doctors examine him, there are no clues to diagnose his problem and it leads to a mystery. Three months later, Renai experiences weird supernatural happenings and sees apparitions and convinces Josh to move to another house. 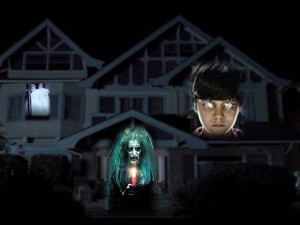 After moving to a new house, she experiences many paranormal activities but Josh never believed in her words but when his mother Lorraine explained about similar abnormal vision about Dalton’s room they invite Elsie Rainer, old friend of Lorraine, who brings her team of ghost hunters to investigate the paranormal activities. Elise finds out that Dalton’s spirit has left his body to a place called “Further” and demons need Dalton’s body to cause pain and agony to others. Finally, Lorraine explains Josh that he is the gifted traveler who can go in search of Dalton and bring him back. 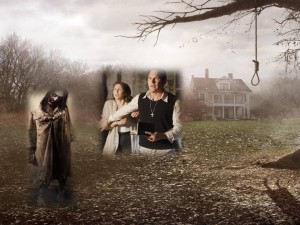 The Conjuring is one of the best American supernatural horror films directed by the director of Insidious, James Wan. This story is about how a family escapes from the evil spirits which try to attack them and their children from the haunted house. Roger Perron and his wife Carolyn move to an old farm house in Rhode Island with their five daughters. There were objects subjected to supernatural paranormal activities which were hidden in the basement and its entrance was locked with a long beam. Soon, strange abnormal signs started to happen in their place and they came to a conclusion that their house was haunted by ghosts.

So they call up the famous paranormal investigators, Lorraine and Warren, who started to investigate the case and they found that a witch has sacrificed her seven-day baby to Satan and has possessed the mothers that lived in that estate to kill their children. Lorraine and Warren put their best efforts to deliver Carolyn from the haunting spirit and to protect the five children. The sudden attacks of the fiend takes the audience back in fear and panic and it is a must watch movie on Halloween. 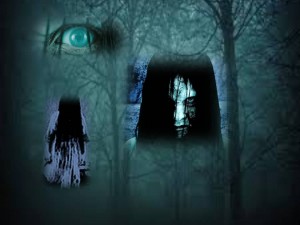 The Ring is one of the best American psychological horror films which were directed by Gore Verbinski. As his name sounds, the movie is full of gore and bloodsheds caused due to darkest evil forces. Naomi Watts, famous British actor and producer takes the lead role as Rachel Keller who acts as a journalist in this movie. She starts to investigate a videotape which is responsible for killing four teenagers including her niece on the same day at the same time.

While investigating the case she found out some pictures of some cabin where her niece and her friends stayed a week before the deaths. Rachel gets to that cabin and finds a video tape which says after watching it; the viewer will die in seven days. Along with her divorced husband, Noah, she starts to find the details of the owner of the tape and finds it to be Anna Morgan and her daughter, Samara Morgan.

While investing the case, Noah was attacked by some evil forces and the story continues as Rachel unlocks the secrets of the video tape, and hopefully finds a way to break the curse. This is considered to be one of the best horror and scary film one would watch on the face of this Earth and mainly played again and again on Halloween. 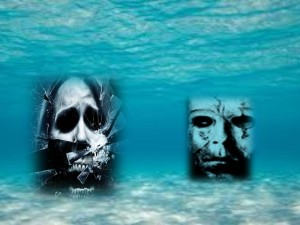 Final destination 4 is an American Horror film written by Eric Bress and directed by David R.Ellis and it is the highest profitable movie among all the other parts in Final Destination. This story is about a young boy named Nick O’Bannon who suddenly has some precognition and predicts things that comes to pass in reality.

It all started in a race at McKinley Speedway where he along with his girlfriend, Lori Milligan and their friends was watching a race. Suddenly, he gets a future sight that race car crash will occur killing numerous people. Nick panics and tells his friends to come out of the race rally and they do so and to their surprise it just happened what Nick had told about his precognition.

This occurs on and on as the story continuous and many people die including his close friends in a terrifying unexpected manner which thrills each and every one of us to watch the movie. This movie is almost watched by everyone on Halloween’s day to make the day even more excited.

Evil dead II is creepier than its first part with more of blood thirsty creatures and a lot of gore violence. This horror film was written and directed by Sam Raimi who was the director for its first part. The story starts with Ash Williams and his girl friend Linda who take a romantic vacation to the cabin in the woods but it turns out to be their worst nightmare. 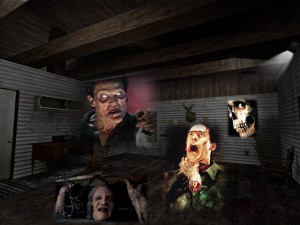 In that cabin, they find a tape and ash plays it to hear the recitations of passages from the book of the Dead which awakens the evil forces in the woods. The evil forces attacks Linda and turns her into a zombie and Ash had to chop her head off to keep him alive. Ash tries to escapes out of the cabin and at that time to his surprise Linda is revived and starts attacking ash. He once for all kills Linda and searches for a way out.

At that time Annie, professor’s daughter and some researchers arrives into the cabin and find ash and they come to know that professor Knowby’s wife Henrietta was possessed and buried in the cabin’s cellar. Finally, the researchers who came along with Annie dies and Ash was possessed partly only during night times and he stabs Annie with his possessed hand and he was confronted by a group of knights who mistook him for a deadite.
Even though the movie was screened at 1987; the scary demonic scenes are still fresh in our hearts and minds and frightens us when we think about it.